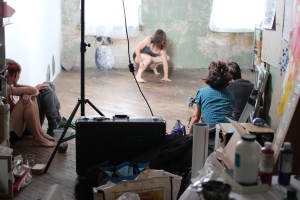 The François Vase is a work for video projection and string quartet by Gabriela Vainsencher and Daniel Fox that retells the Greek labyrinth myth from the perspective of the Minotaur. The video can be screened in HD with recorded sound or with a live performance of the score.

The François Vase was supported by a Presser Award, a Subito Grant from the American Composers Forum, and a Dean’s Grant from Boyer College of Music and Dance, Temple University. 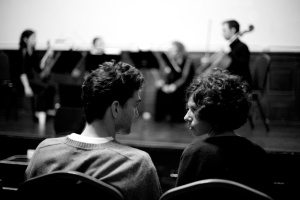 Gabriela Vainsencher is an Argentine-born Israeli artist living and working in Brooklyn. Her drawings, installations and videos have been shown in the US and abroad, including a 2012 two-person exhibition at the Musee d’Art Moderne, Le Havre, France, who added Vainsencher’s video, Reconstruction, to their collection. Recent solo exhibitions include Recession Art gallery, New York, NY, and La Chambre Blanche, Quebec City. Recent group shows include The Freies Museum, Berlin, The National Gallery of Saskatchewan, Canada, Pierogi gallery, Dumbo Arts Festival, and Parker’s Box gallery in Brooklyn. She has participated in artist residencies including Yaddo, The Atlantic Center for the Arts, Triangle Arts Association (all US) and La Chambre Blanche (Canada). Vainsencher is the founder of the Morning Drawing Residency, writes about art for Title Magazine and The Huffington Post and occasionally teaches art at Williams College, in Williamstown, MA. She began the MFA program at Hunter College in January 2014

Daniel Fox’s compositions have been described as “strongly imagined” and “driven by propulsive counterpoint” (Alex Ross, The New Yorker). In 2013 He received the Presser Award and an American Composers Forum Subito Grant to collaborate with the visual artist Gabriela Vainsencher on The François Vase. Fox was born and raised outside of Philadelphia. He received a PhD (2005) in Mathematics from Duke University and was a National Science Foundation International Research Fellow at Oxford University. His mathematical research focuses on calibrated geometry and integrable systems.  He has studied composition with Phillip Cooke, Andrew McPherson, Maurice Wright, and Jan Krzywicki. He studies composition in the PhD program at CUNY Graduate Center.

The François Vase features a performance by Green Chair Dance Group on location at the Delaware Waterfront and at 319 N. 11th Sreet Studios, Philadelphia, PA. The music was recorded and performed live by the Momenta Quartet. Cinematography and editing were provided by Dave Jannetta. The music was recorded by John Gurrin at the NYU Tisch School of the Arts recording studio.